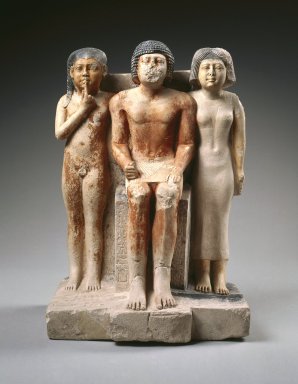 Statue of Nykara and his Family

This family statue depicts Nykara, who was a scribe of the granary, seated between the standing figures of his son, Ankhmara, and his wife, Khuen-nub. Beneath the central part of Khuen-nub's short wig, her natural hair is indicated by horizontal lines and a row of stylized curls. The boy's nakedness, sidelock of hair, and finger-to-mouth gesture indicate that he is very young, but he is depicted as the same height as his mother. And, if Nykara were shown standing, he would tower over his two companions. Although Old Kingdom group statues often show the man on a larger scale, this particular composition seems also to reflect the sculptor's desire to show all three heads in a row.