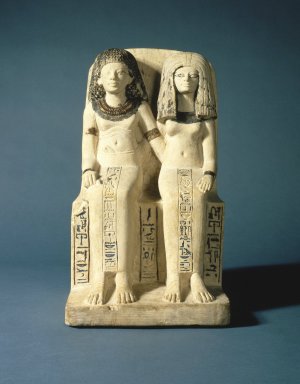 Nebsen, the scribe of the royal treasury, and his wife, the songstress of Isis, Nebet-ta, wear the elaborate wigs fashionable in the later Eighteenth Dynasty. Their jewelry, painted yellow to imitate gold, was varnished to make it shine; the varnish has darkened with time. The inscription tells us that the statue was made for the couple's tomb by their son, Weserhat. In fulfilling this filial duty after their deaths, he had them depicted in the fashion of his day, rather than that current under Thutmose III, when they actually lived.